Rapha Rising had a little mini challenge that coincided with the ‘queen stage’ of Le Tour, which is basically the stage in which the riders hit the gnarliest Pyrenean peaks. The interim challenge required that you to ride as many vertical KMs as you could on that same day. I knew I had no chance against the other extremists doing the challenge, but I saw it fitting that I squeeze in at least one Hors Catégorie climb for the occasion. I chose Mt. Donna Buang. The only problem was; I had to do it before work. I set my alarm for 4AM, ignored the weather report forecasting snow above 1000m, made sure everything was in working order and hit the hay.

I had a rough sleep, troubled by everything from riding in the dark, to simply where I was going to park my car, but I still managed to get going at 4:30AM. After way too much driving I stopped 10km from the base of the mountain at Yarra Junction so I could get my legs warmed up.

Riding in the dark is a strange experience, especially in a forest, with no artificial lights other than my little halogen silicon thing (which irritatingly kept switching back to flashing mode every time I went over a bump). I felt surrounded by the creatures of the night, and since they had probably gone to bed moments before I so rudely woke them up again, I assumed they were pissed off. At this point I wouldn’t have been surprised if I got spear tackled by one of those black panthers people keep spotting.

Riding in the serenity of the dark is good for one thing though, my breathing was steady, my heart rate was low and I could climb at the speed I was going all day and never be in trouble. Granted my average was comically low, but I didn’t care, I wasn’t there to smash any records (they were far out of my reach anyway). It was a milestone just to make it up without stopping!

The light was gathering and I could see more of the views, triggering that euphoric feeling which is the main reason I climb. I lost count at about 20 lyrebirds and nearly fell over a few times trying to take a photo of one (to no avail). Things were looking alright, my legs were fine, I was dry and the wildlife was coming out to play. I thought I might just make it out of there with no dramas. I was wrong.

At around 900m of climbing it started raining, no?  Was it sleet? Or light hail? I decided that I’d say it was snowing for hyperbolic purposes. Another 100m and it was pretty clear that I didn’t have to make up any stories, it was legitimately snowing. It’s wise never to take alpine weather reports lightly, but somehow I always do. This was ok, I was warm from climbing and I had dry long fingered gloves in my jacket. Plus it was pretty exciting. I got to the top and took as many photos as my numbing fingers would allow and thought I’d better not stick around and pointed the bike downwards.

Suddenly I was instantly soaked, my fingers, face and toes were instantly numb, my cleats were icy and wouldn’t snap into my pedals, and of course the road was slippery as hell. My rear brake pads were already wearing thin and were completely gone after a couple of KMs. Not that the brakes were doing much anyway. The snow turned back to sleet, and then to rain as I descended. Halfway down felt it significantly warmer so I checked to temp on my Garmin. It was 2 degrees, comparatively balmy. I was pedalling and braking at the same time to keep blood flowing in my legs, never getting over 50KM/H. After an eternity I reached the bottom and cursed myself for not having parked closer, another lesson learned. I sprinted through the rain to keep warm. When I got back to my car I changed into PJ’s that I’d worn on the way, another mental note, bring a more comprehensive change of clothes, or climb high mountains in spring, its warmer.

One more for the books, it’s the first time I’ve turned up to work in my pyjamas. 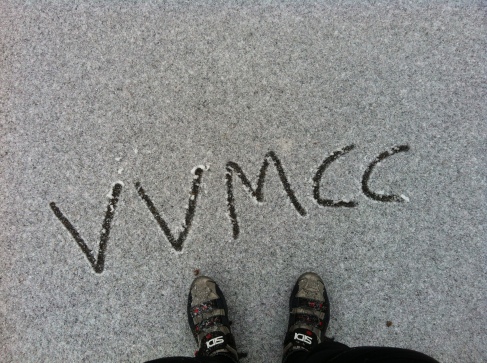